After a long wait, the first Fissler Academy café in Shanghai 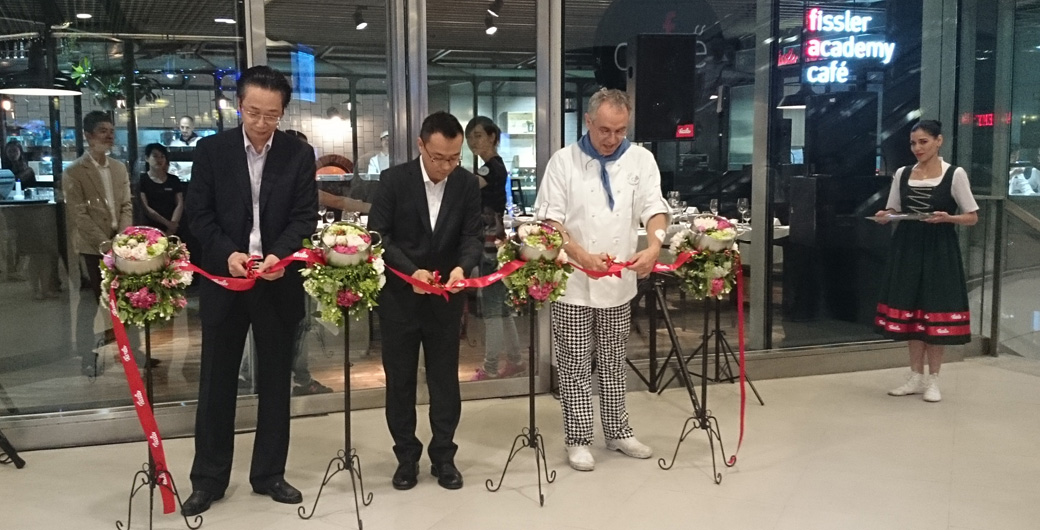 After a long wait, the first Fissler Academy café in Shanghai

Not only pots, pans and kitchen accessories, for Fissler, from June 12, now, there is also a gourmet restaurant. It’s called FA café and was opened in Shanghai. F for Fissler, A for Academy. As the name suggests, it is a new service model that combines tasting with training.

A big party for the opening with the performances of a well-known group of dancers and quick-change artists and a Chinese tenor who sung some classic Neapolitan songs transported magnificently in what was once the Celestial Empire.
Constantly growing presence in the Chinese market with stores located in more than 40 cities, Fissler, one of the most important brands for high-quality cookware, today is synonymous for cooking with passion and pleasure. Passion and pleasure that it promises to share with its consumers through different cooking classes.
Not in a sacred grove with olive trees as Plato wanted, but in seven floors of shopping and entertainment between the two Grand Gateway’s twin towers, at a busy crossroad, which someone could consider as the New Yorker Times Square, the restaurant-academy created by the German company wants to leave its mark with Western food recipes and a range of training courses to master, easily and happily, various aspects of the complex food experience.
The West, then, becomes “a bite”, as the title of a culinary documentary, which, a couple of years ago, drove the Chinese audience crazy.

And from Naples, its birthplace, “a bite” became also the pizza. Thanks to the invaluable help of Enzo Coccia, the authentic flavor of one of the world’s most popular dishes reached the “Paris of the East”. A consultancy that started with the new year, three instructors and a dozen of trainees to put a spotlight on the café real star. Among the crystal glasses sparkle, the porcelain dinnerware set fineness and the stainless steel pans and accessories power, it sneaks a variety of ingredients, which come directly from the city of Naples to stuff the handmade dough disc. To this collaboration our Prime Minister would assign a full score. In those days, before his visit to Beijing, Matteo Renzi went to Shanghai and applauded the Sino-Italian partnerships finding strong support from the Chinese Premier.
Next occasion is set on July 1st in the Forbidden City.