A new dessert at La Notizia: from Vico Equense arrives the spumoni 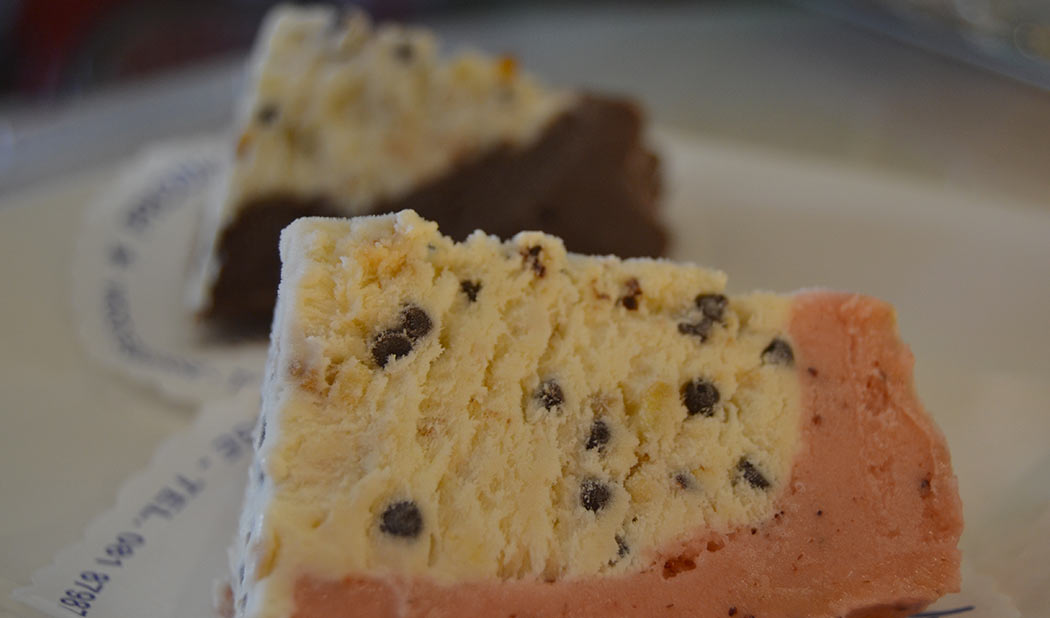 A new dessert at La Notizia: from Vico Equense arrives the spumoni

by Enzo Coccia
Hot summer days call for ice cream and La Notizia got ready for offering to its customers a more summer way to end the meal. Actually, to be honest, when the dessert at issue is the creamery Gabriele’s spumoni you don’t need to have a look at the calendar.
Soft inside, solid outside. This is how the domed shaped cold goodness is. Satisfying everyone’s tastes, chocolate, strawberry, coffee, hazelnut or pistachio cover candied fruit, nuts and chocolate chips in the fluffy mousse that gives the name to the semifreddo conceived by the creativity of Monzù in the aristocrat’s kitchens.
From the sorbet to the ice cream, form the ice cream to the spumoni: the evolution of a product, which is sweetening our palates from many, many years, tells the history of the world’s people. Before the Chinese followed by the Egyptians and the Romans began to mix the fruit nectar with the honey and the snow, Isaac offered Abraham goat’s milk with small ice crystals. While in the West the Middle Ages veil wrapped with its shadow the voluptuous pleasure of chilled drinks, in the East sherbeth was enjoyed with juices, syrups and juleps.
Then, the “cool drink” landed on the shores of Sicily thanks to the Arabs. The Mount Etna snow, which was collected in neviere (kind of cave where people used to store the snow), the fruits, which the land profusely provided, and the sea salt, which abounded along the Sicilian coasts, essential to maintain the negative temperatures, gave the push to the sorbet spread and its improvement. And walking through the Italian boot, it went to France. The marriage of Catherine de’ Medici and Henry II, Duke of Orléans, was the perfect opportunity to impress the guests with a mix of zabaglione, cream and fruit, the “most singular dish that has ever been seen”.
Maybe not Ruggeri of Florence, poultry seller, but Francesco Procopio dei Coltelli was the first to have invented the ice cream. With his revised recipe of the Saracen sorbet in his pocket, the fisherman from Palermo went to the court of the Sun King. Guardian of the cold Oriental tradition, he opened two shops to sell frozen waters, ice creams with fruits, juice of lemon or orange, cinnamon and anise flowers, frangipani and strawberry sorbets. He became famous as famous Café Procope still is, visited today, as at that time, by intellectuals, politicians, writers, musicians and philosophers.
Meanwhile, the icy specialty, pride of the Italian gastronomic culture, enriched with other ingredients such as sugar, milk, cream and eggs, turned into ice cream that soon was sold in the street. Another Italian, another creation. From the invention of the cornucopia, the walking cone, there was a crescendo of novelties.
However, getting to the moment when the Neapolitan ice cream master imagination gave life to the spumoni. It apparently took shape with the name of cassata napoletana when Naples was the capital of the Two Sicilies. It had its heyday after World War II, chosen as the sweet for special occasions. Forgotten for a while, the spumoni, cleverly described by Matilde Serao, returned to attract the attention of the sugary food addicted. The United States celebrate August 21 with the National Spumoni Day
y: it means that you must eat it.