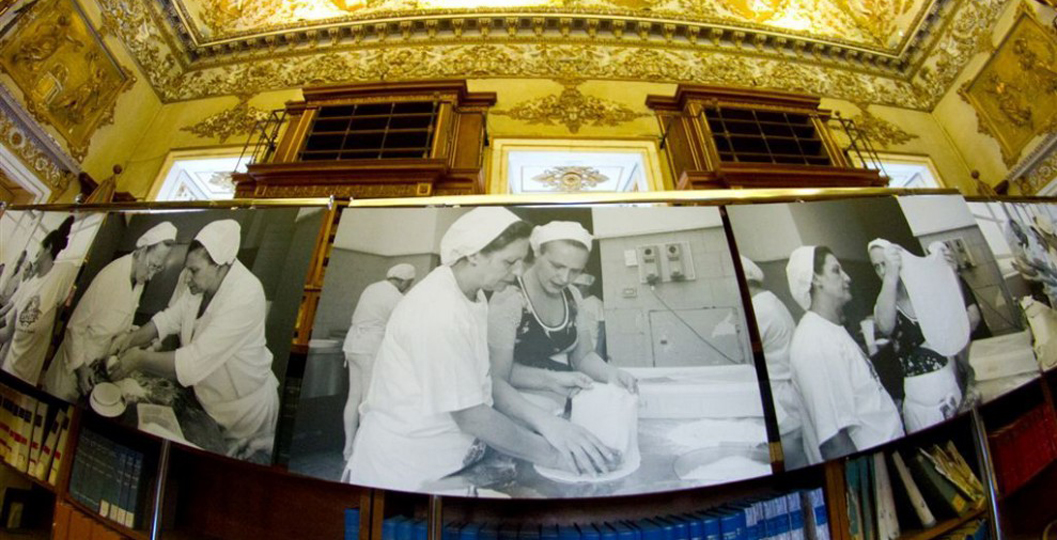 10 black and white photos follow one another among the Victor Emmanuel III National Library of Naples centenary papers in Gilda Valenza’s photography exhibition from December 7th until Epiphany. “La menzogna sta nelle cose non fotografate” (untruth lies in the things unphotographed) is the really meaningful title chosen by the Neapolitan photojournalist to tell the reformatory path of nine convicts in the women’s prison of Pozzuoli.

This year again, the pizza has been chosen as an opportunity for social redemption in the project promoted by the director, Stella Scialpi, and coordinated by the Educational Area of the penal institution. And this year again, the master Enzo Coccia made the secrets and techniques of classical Neapolitan pizza available to those women. From the dough-preparation procedures to the soft pizza ball shaping, from the pizza disc stretching to the way to add toppings and bake a pizza: nothing escaped from drawing with light.

Neither poses nor effects, as reality splinters, those images show the inmate strong determination and their wish to be born again understanding that another life is possible. Among smiles, sharp looks and industrious hands, the camera moved to display the complicity and cooperation that the pizza has been able to accomplish in a place that denies many aspects, even the most ordinary, of everyday life. “These pictures establish a duality of who is in and who is out”, said the photographer during the opening day, “and iron out the differences”. Who is out doesn’t feel that the trainees live behind the jail’s grey bars, who is in proves to use all his forces to admire again the clear sky and the streets lit by the sun.

At the exhibition opening, on behalf of her mates, thanks to a special permit, Giuseppina helped Enzo Coccia and the staff of La Notizia to prepare fried pizzas for the participants, thus giving evidence of the skills she acquired.