When the taste is contained in a few bites

When the taste is contained in a few bites

“Te fa saporito – nu bello murzillo, che ‘nsi a lu detillo – te face alliccà!”
there was once the Neapolitan opera buffa that, with its verses in dialect, put people’s characters and situations up. There was once and still is the murzillo saporito, a little sandwich with a finger-licking taste: it is done by the master Enzo Coccia.
In the neighborhoods animated by the voices of street vendors and clouded by the smoke of copper pots, variously filled, the murzilli, literally small bites, were one of many Neapolitan street food examples. Because the Neapolitan street cooking is not just pizza. The city of the mermaid Partenope offered many low cost gastronomic choices: delicacies that filled the stomach and deluded the appetite, basically made with scraps and leftovers of the more delicious merchandise purchased to prepare the daily meals of lords and nobles. 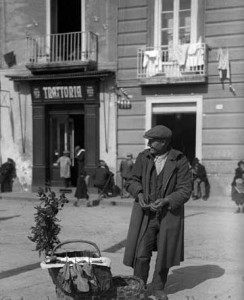 From scagliuozzi to zeppole fritte, from cartoccio di fravaglia to brodo di polpo and castagne allesse: in the city narrow streets between cauldrons and carts, people could buy them with one or two coins. But for the poor, above all else, there was bread. Mind you, not the one prepared with the superfine flour, because it was too expensive, the Neapolitan hoi polloi used to eat the wholewheat flour bread like the casatiello that, under the Bourbon rule, was made with lard, black pepper and raisins, a real panacea if eaten in the early hours of the cold mornings. Later, adding cheese, eggs and remains of various cured meats, the casatiello, from which comes the panino napoletano, or in the jargon pagnuttiello, has emerged as a typical dish of the Risen.
Soon after, the time of the sandwiches with pork belly, while from the surrounding small towns came the ones with ricotta ‘e fuscella, so called because it placed in the fuscelle, rattan hand-woven baskets with a cylindrical shape, or sometimes wrapped in fig leaves. Food of street trade, after Italian unification, Food of itinerant trade, after the unification of Italy, started to fill the counters of the charcutier, or as Totò also said, the casanduoglio, the modern deli owner.
Delicacies in a small size, traditional meal of workers and farmers, have been revised by Enzo Coccia who, creating a blend of whole wheat flour, to be in tune with the tradition, and 00 flour to obtain an easier to digest product, has gave birth to a specialty with a unique taste.