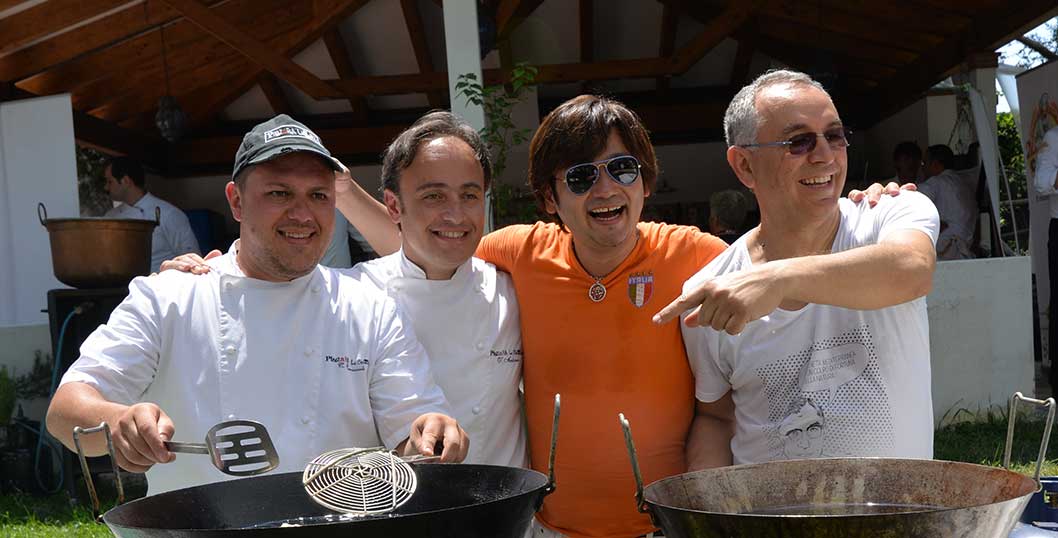 On these nights we would sing the famous song “look at the moon, look at the sea”. And if the sea is the one that touches the beautiful Sorrento Peninsula coast, which greets the Vesuvius, the success is assured. And if we are talking about Festa a Vico, the success is sure and great.

Although it was arranged on different days, the event conceived by 2 star chef award Gennaro Esposito invariably showed the frivolity and the wish to be together that have always animated it and that, every year, open the doors of the beautiful coastal town to those who, masterfully, delight Italians’palates.

Rendezvous for the big names of our cooking, for its twelfth edition, took a leap back in time with a theme close to the one of 2005 edition.

“Il ritorno delle mani amiche” (or “Going back to the past”), a clear tribute to the meeting that was arranged ten years ago and during which each chef presented his favorite artisan, strengthened the hand and the heart shakes between those who create in the kitchen and those who, supplying the raw ingredients, result of the manual skill that took the center stage, make possible a dish preparation. And just like that time, whose stories can be read in the book Il gioco delle mani amiche, the complicity that makes our cooking popular anywhere in the world was celebrated again.

It all started by chance, as randomly the name was invented. From the early surprise party for a small group of restaurateurs, the festival nowadays counted nearly four hundred chefs. Not only some of the most important Italian chefs but also some emerging young chefs arrived in that charming stretch of coast: here the newer chefs found the positive atmosphere to make a name and express their thoughts.

Many new entries and many innovations were desired by the owner of La Torre del Saracino, starting from the opening, on Sunday, June 7, which, in the name of “La Repubblica del Cibo”, involved a greater number of shops as veritable food shops, because the three day long party, over the years, has attracted more and more common people. So among t-shirts, jeans, brushes, beauty creams, furnishings and other items were inserted the flavors, the colors and the aromas of the dishes prepared for the party.

When the good food becomes public thing, the pizza participates too, the democratic dish par excellence, which, fried, was made by Enzo Coccia and baked by Gianfranco Iervolino and Corrado Scaglione for the greats of the Italian cuisine. By the way, Enzo was the first pizzajuolo who answered, in 2008, to the call of chef Esposito to whom continues to answer participating without showing tiredness, but only energy and enthusiasm that are renewed in every annual gathering. Nothing in common with the light Monday lunch: at “Effervescenze di Pizza”, the picnic organized at Villa Capo Santa Fortunata, between Sorrento and Massa Lubrense, the chefs had the right push to organize the “Cena di Beneficenza”, which took place at Giusso Castle.

Then again pizza and again on the streets. For “La notte delle Stelle”, on Marina di Seiano seafront, the leavened dough disc with some other delicious creations ended the first event of our long hot summer.

Of course donations to non-profit organizations, but this is nothing new.