My encounter with Ferran Adrià 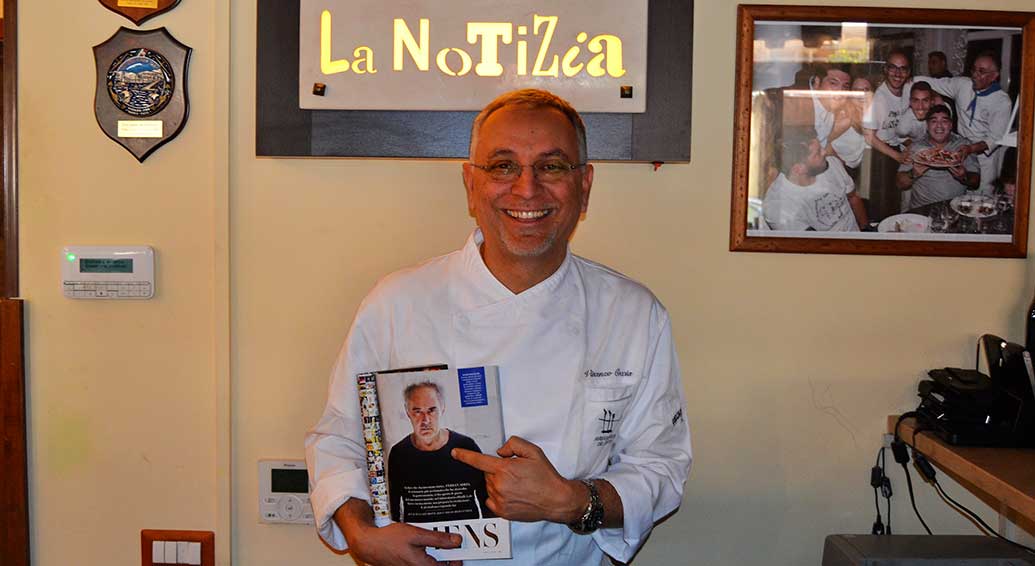 My encounter with Ferran Adrià

I had the pleasure of hosting at my pizzeria La Notizia 94 the great, unique, the genius, the one who revolutionized global gastronomy: Ferran Adrià, the famous chef often associated with molecular cuisine motivated by the idea to create unexpected contrasts of flavors, temperatures and colors to provoke, surprise and delight.

It was March 30, it was Saturday, when I received two phone calls. The first one was made by the then Director of Gambero Rosso, Stefano Bonilli, journalist, man of great intelligence who, with his deep perception, had understood, already during the 80s, that the cuisine would have become first a cultural phenomenon and then a media one. An important aspect, especially in our times, when the cooking, or more generally food, is increasingly assuming a social value.

The other phone call was made by my friend Marco Bolasco, he also journalist as well as henchman of Bonilli, currently Director of Slow Food Editore. I remember very well that Saturday because I had a dinner appointment with the President of Calcio Napoli and the whole team. I thought “what a disaster!”. There was also Saturday night customers’ noise.

Ferran Adriàarrived with his wife; he came to La Notizia 53, the historical one, and then someone told him to go to La Notizia 94 where he had a reserved table. I remember that I found him seated, he was completely soaking wet because of a strong storm so much that I proposed him to change his clothes. I prepared a tasting menu with my collaborators and saw him, as usual, absorbed to codify my dishes with numbers.

I had already met Ferran Adrià many times during his conventions in Italy. One of those was organized in 2006 during Terra Madre where, together with Carlin Petrini, entered the opening ceremony.

Five years have passed from that encounter at my pizzeria and a few days ago I received a wondeful surprise: I found out that Ferran Adrià remembered me and the dinner at my place by mentioning me in an article published on Vanity Fair in which he says that “la pizza che ho mangiato da Enzo Coccia, a Napoli, è “alta cucina” tanto quanto quella di Joël Robuchon”(the pizza he had at my place, in Naples, is “haute cuisine” as much as that of Joël Robuchon).

I would like to meet him again one day to let him taste the new recipes I put on my menu. Maybe with more ease and without heavy rain to talk about his project at El Bulli Foundation.