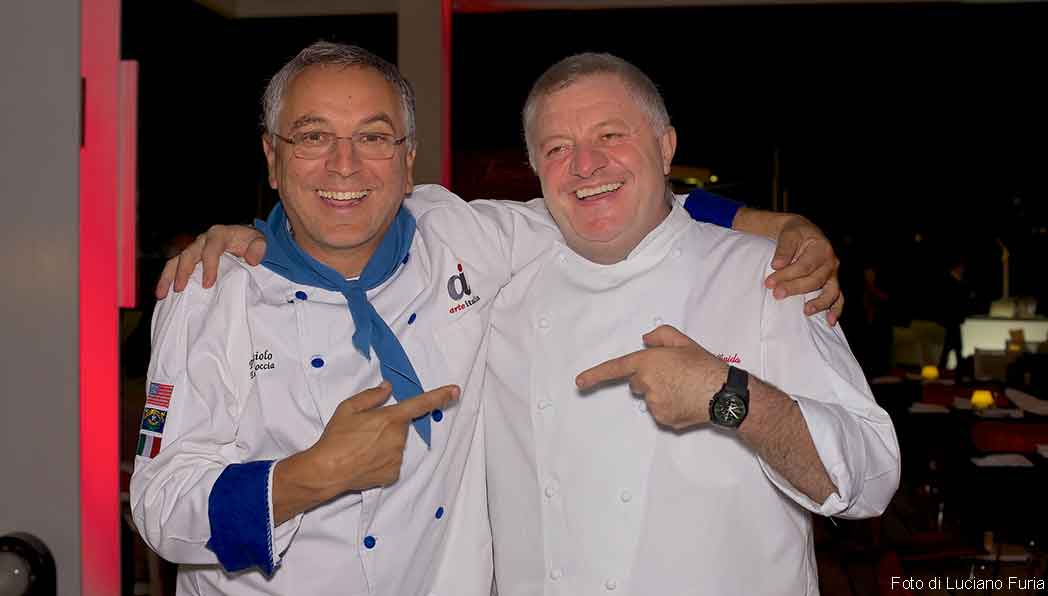 They both followed their parents’ footsteps: when teenagers, moving between pizza peels and pans, went into the father Antonio Coccia and the “grandmother”, or rather mother, Rosa business until they took their own path. Twenty years on, the determination and the will to do are always the same.

To celebrate them properly, the refined Yacht Club Marina di Stabia, summer lair of the Antica Osteria Nonna Rosa in Vico Equense owner, hosted, on Monday September 29th, a great evening made ​​special by the program held at the poolside. Like the Persuaders Roger Moore and Tony Curtis of the popular 70’s TV series, Enzo and Peppe, thanks to their friendship, worked to solve the intrigue of this tasty “case” and tell, with their dishes, different experiences, gratifications, activities and problems that have marked, so far, their path.

A pizzaiolo with the gift of the chef creativity and a chef with the passion for bread-making and dough rising typical of a pizzaiolo: they were the protagonists of “Attenti a quei due”, the exclusive event arranged to celebrate the first two decades their bright career.

The pizza, in all its declinations, and the Bay of Naples beauty, overlooked by the majestic Mount Vesuvius, wrote the screenplay of appointment marked by the sea waves’ sound, the boats’ rocking movement and the islands’ lights on the horizon. There was something for everyone. To animate the night in the moonlight there were the baked pizzas, the fried pizzas and the montanare made by Enzo Coccia and his entourage, the savory stuffed pizzas, created by Francesco, Peppe ‘s eldest son, and blood will tell you, which, last year, under the supervision of the master took his first steps in the world of pizza.

But also some sweet dishes prepared by the rest of the team welcomed such an important event. A grand finale for this Monday evening’s celebration with a theme cake, a pizza, precisely, by the chef from Vico Equense.