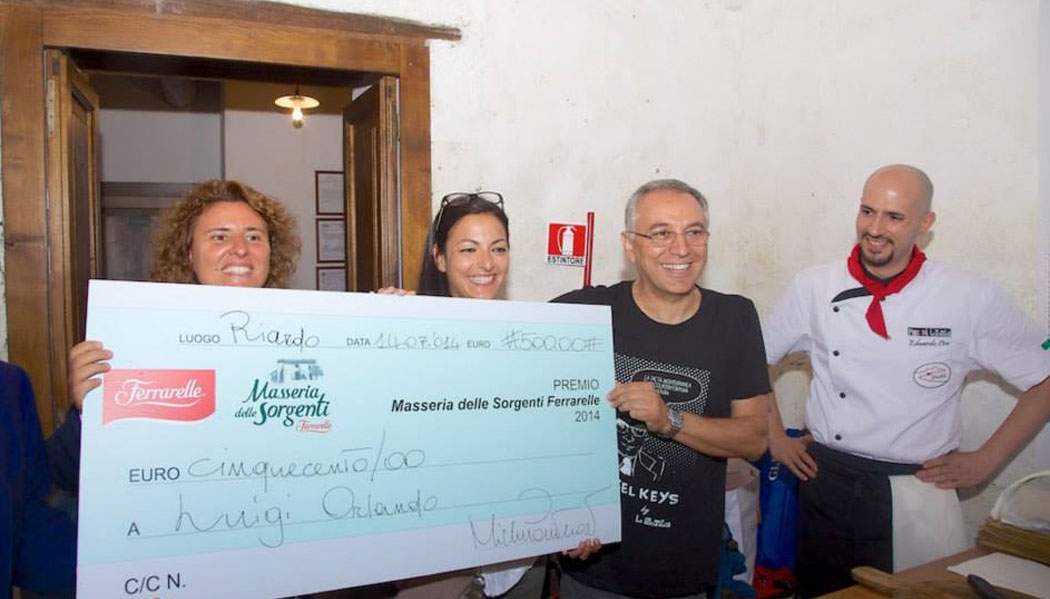 A successful pizzaiolo, teacher not only at training courses, often with a foreign audience, but also at nutrition education classes for children and workshops for college students, globetrotting consultant for the opening of new pizzerias, back from China where he opened two places dedicated to the white art, Enzo Coccia has enriched his resume with this other experience.

Called upon to judge the compositions written by the students and the graduates of Suor Orsola Benincasa University based in Naples, on July 14, he joined familiar faces in the food & beverage field such as the anthropologist Helga Sanità, the journalist Tommaso Esposito, the president of the Verace Pizza Napoletana Association Antonio Pace and the Head of Communications for Ferrarelle Michele Pontecorvo in designating the winner of the Masseria delle Sorgenti Ferrarelle award.

A special place in the upper region of Caserta, on the borders with Lazio and Molise, the Ferrarelle Oasis in Riardo, a vast green area of 145 acres, where the famous naturally sparkling mineral water sources gush, enhanced thanks to the collaboration between the FAI and Ferrarelle, was the scene of the event, at its first edition, coordinated by the food journalist Laura Gambacorta.

Thinking about what was around when water, food and territory come up together, the participants had to condense into 3000 keystrokes their considerations on the importance of these three factors interaction on the economy, history, culture, traditions and well-being of a population. By “A This is Water”, which gives its title to the collection of texts of the American writer David Foster Wallace, and his speech given at Kenyon College on May 2005 was inspired by Luigi Orlando who was awarded with the highest step of the podium and received the check given as a prize.

Some other well-known masters pizzaioli participated in the event and delighted the invites with some their specialties and, for the occasion, Enzo Coccia baked pizza Masseria delle Sorgenti, from the name of the host infrastructure, with melanzane a funghetti (small fried pieces of eggplants), mushrooms, friggitelli (small sized, slender, south Italian peppers, smoked buffalo mozzarella and pecorino cheese, all seasoned with extra virgin olive oil obtained from the olive trees of the gardens.