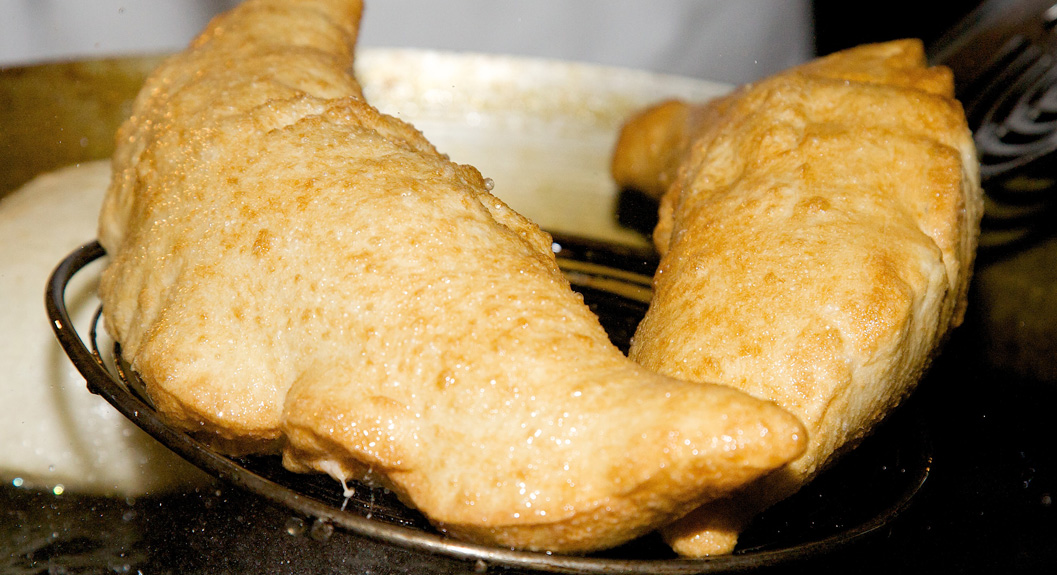 Do you remember the beautiful Sofia giving the voice “eat today and pay within eight days”? It was the Second World War and in the black and white sequences in front of the slum, on a counter, with tempting movements, the big-breasted pizzaiola covered in flour stretched the dough discs, which plunged into the cauldron of boiling oil, were the delight of the bystanders. A few coins and the gold of Naples, I borrow the De Sica’s movie title, when the extreme poverty ruled and the pizza, the classic one, baked in a wood-fired oven and topped with tomato sauce and mozzarella cheese, had become a luxury, fed the Neapolitan people.

Daughter of the zeppola, the one described for the first time during the Sixteenth century by Giovan Battista del Tufo, which the street vendor gave with apples. Pull-on twigs, as De Boucard showed, the sweet sugary donut, the noble city of Naples pleasure, soon gave way to the salty and more filling ones. With the help of the hunger, from the white donut they came to what in Neapolitan dialect are called pizzelle ‘e pasta crisciuta.

Seaweed, anchovies, cod or cicenielli (whitebait) to enrich them, to eat just fried, crispy and piping hot, these little balls of water, flour, yeast and salt, traced by the pen of Ippolito Cavalcanti, were paired with potato croquettes, the scagliuozzi, the cartoccio di fravaglia, brodo di polpo and other dishes that the narrow streets offered.

Mbottunate d’alice, as the Duke of Buonvicino suggested in his essay “Kitchen Theoretical and practical cuisine”, the deep-fried pizza, or more generally a zeppulella, in 1847 was stuffed with steamed and spineless anchovies, marinated with oil, salt and pepper. Two layers of dough, all around flattened, which came out from the zeppolajuolo’s shop.

The emergence of producers guilds, which set specific techniques for making not only the golden and crispy pizza but also all the fried products, imposed special attention to the newbie training. Still children, the future deep fry masters went to the shop to learn all the tricks of the profession.

Various types of deep-fried pizzas and zeppole: from those of pasta cresciuta to montanare, which had a different dough consistency, from deep-fried pizzas also known as piscitielli, mezza luna o battilocchio to padella or brioche, the latter made with a stuffed dough base and covered with an additional disc of dough.

A such variety that requires a terminological clarification. The original entry zeppola borrowed from the Neapolitans for the savory one, for which it would be more correct to talk about pasta cresciuta, would state only the sweet delicacy. No matter what the name is, neither the shape nor if they are stuffed or dressed after cooking, it is impossible to resist to these gluttonies!