The anthropological value of pizza

The anthropological value of pizza

The pizza, besides having an alimentary importance, as an example of the Mediterranean diet, has also an anthropological value.

From street food to a strong identification symbol for the Italians. With the emigration, in fact, it played a key role becoming the banner under which a whole nation was protected, keeping the bond with the native culture alive, an Italian character of home and domestic originality. 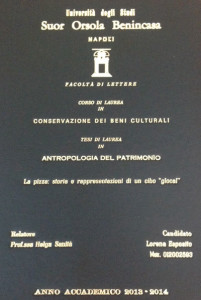 It’s not a coincidence that the pizza, before being a product made following a recipe, is a mindset, a way of conceiving the taste. For the anthropologist Vito Teti, food evokes and, in some way, makes present an anthropological place, is the bridge to people’s own land, their loved ones, their places.

Not only that. The world we live in is even more globalized and the pizza too became a dish that symbolizes the globalization, one of the most marketed and imitated product of the global gastronomy. We can say that just the Neapolitans invented the culinary globalization, before the fast foods invaded the city, bringing pizza, spaghetti and much more with them, starting from the kitchens poor of Naples, until it became a symbol not only of the city but of the Italian cuisine in the world.

A factor that contributed to its spread, in addition to its delicious taste, is that it assumed a strong socializing value: it is loved by the adults, the young people and the children. A metropolitan ritual that finds everyone in agreement. And above all, it meets today’s needs: it is savory, cheap and can be quickly eaten.

As the anthropologist Marino Niola says: “the Neapolitan pizza is the global flag of Italy to eat. Emblem of Italy and the double heap of the Italian character that is Naples”.< The typical example is the pizza with the tomato sauce and the mozzarella that with the basil leaves begins to play a patriotic function, becoming the symbol of Italy’s unity, it joined the Italians, at least at the dinner table, and played a crucial role in building the national gastronomic identity. In a globalized and McDonaldized society, the Neapolitan pizza is a scarlett coffer of health, as it has been defined by the Fondazione Umberto Veronesi, it is a true lifeline in a world that is moving fast. It is the first fast food that is made quickly and aligns with the current needs, without sacrificing the genuineness, the taste and the conviviality.

For its “value”, with spaghetti and mandolino, is one of the elements of the Neapolitan oleographic triad. It gave the idea and the inspiration to capture the city’s stereotypical image and it is still a focus of interest as well as the pizzaioli who hold the product name high. I finish with the master Enzo Coccia’s words: “The Neapolitan pizza is the history of the city of Naples, its tradition. It is a photograph of an area that expresses some flavors, aromas, a history and a technique”.