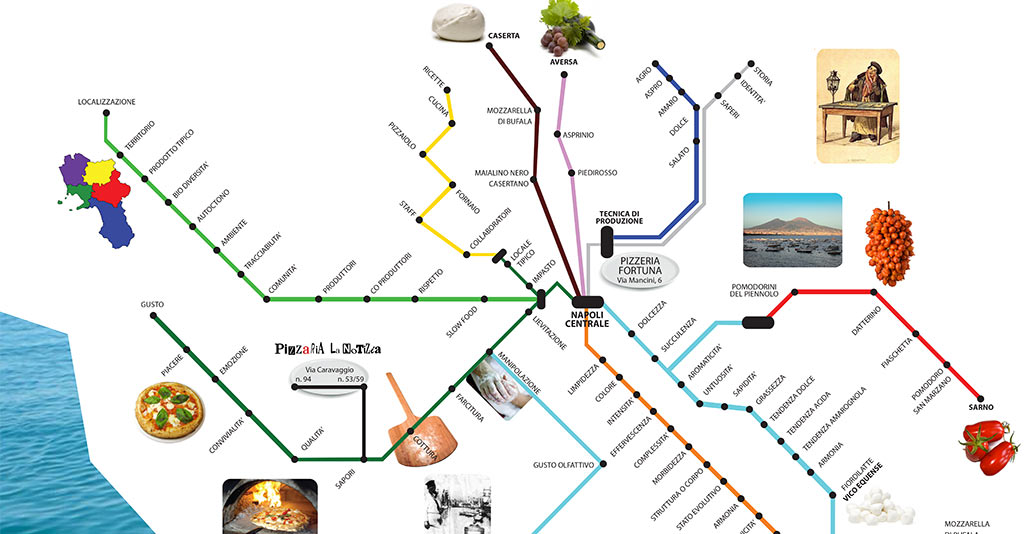 And it’s really nice and sweet my city, indisputable how pleasant is to walk along its streets. A pleasure that grows if you are pampered by the springy sun warm hug. From piazza Garibaldi up to Quattro Palazzi and piazza del Plebiscito, going to Spaccanapoli: a string of old buildings, squares, churches leads step by step to the discovery of what UNESCO declared World Heritage Site. But if the destination is a little further away, far from the center narrow streets, then it is necessary to catch the metro.

London has the world’s oldest underground railway, while Naples, with Toledo stop, has been considered one of Europe’s most futuristic-looking stations in the CNN rank. Well-articulated the railway system that twists and turns in the subterranean networks shortly leads you from one city’s area to another.

By this elaborate scheme, ingenious work of great architects, I was inspired to draw my own map, the one of Pizzaria La Notizia network. Like any good tourist is guided by the rail transport path to discover the historical, artistic, natural, and why not, even the more mundane beauty of a place, I decided to offer a compass to orient those who want to embark on a journey in the direction of the Neapolitan pizza and its complex world.

From Fortuna central station, where it all began, we depart at high speed toward the destinations-tiles of the genuine Neapolitan dish wide mosaic. Lines and stops, some real, some result of my creativity, invite passengers to board the train that moves between organoleptic properties, typical products, production techniques, operational structures, physiology of taste, senses and tradition. As the winds of passion, respect, love and emotion blow on the tomato red line and the grape wine purple line, rush toward Sorrento peninsula and its extravirgin olive oil or divide between buffalo mozzarella from Paestum and the one from Caserta, long is the line that typifies not globalized gastronomic production. Green, as the environment and as the hope of seeing a redeemed territory too often abused by those who do not have a conscience, is the route that runs to the prosperous Campania and its producers, its communities, its biodiversities.
Have a good trip!