Toxic pizza? The master Coccia at the University to clarify the matter

Toxic pizza? The master Coccia at the University to clarify the matter

Do you remember the episode of Report on the Neapolitan pizza? We can’t forget it and we can’t forget the almost endless uproar that it has caused. Many voices were raised everywhere to rebut the journalistic inquiry and, above all, many Internet users fingers incessantly hit on the keyboards to refuse the criticisms to the Neapolitan symbol.

Forty days after the service broadcasting, eyes and ears again on the pizza, chosen, on November 9, as the theme of the meeting that gathered students, professors, graduate students, experts and agriculture lovers in the Botanical Gardens of the Royal Palace of Portici. 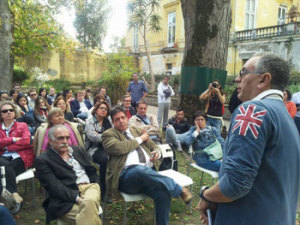 The wide green area is transformed, every second Sunday of the month, in the special scene of Studenti in Mostra, the exhibit-market of food and handcrafted items organized by the Faculty of Agriculture students. For each event, the gardens, which surround one of the most beautiful Royal Palaces in the world, a real gem between the sea and Mount Vesuvius, become an admirable sequence of stands where you can buy high quality foods and objects.

In full view, specialties from small producers: from the honey to the Piennolo cherry tomatoes, from the extra virgin olive oil to the wine, and also buffalo mozzarella, cheeses and conserves complete the flavors show. Next to the exhibition, inseparable, complementing each other like the recto and verso of a sheet of paper, some educational activities, experiments and debates on different topics.

For the November rendezvous an open forum to shed light on the issues raised by the television program.

«Scaremongering is frequent», said Prof. Paolo Masi, Head of the Agriculture Department, introducing the open air meeting. The most striking example? The question of the Terra dei fuochi: a lot of chatter and many controversies later disproved by the reassuring results of some tests carried out on foods harvested in those areas.

Then, the turn of the doctoral candidates Francesco Esposito, Nicola Caporaso and Evelina Fasano, on the hydrocarbons toxicity problem, molecules of carbon and hydrogen that can be produced during the baking and are harmful when that process exceeds a certain level with the pizza carbonization. Hasty to talk about the risks at pizza eater health using analysis made only on the pizza crust. As with a strawberry, which we want to determine the degree of contamination by pesticide residues, to be tested is not only the skin but the whole fruit, a serious study must examine the entire dough disk. That baking can increase the values of these compounds is still unproved, it should be evaluated in a time zero, the moment that precedes the entry of the pizza in a wood-fired oven.

And, of course, the meeting couldn’t go on without Enzo Coccia words, protagonist of a video response to the tv program, hot for the initiative. «To a great extent, university is culture and scientific divulgation, and, as now, it should always be open to all for helping people to understand and spreading correct information to the community». The gathering gave him the chance to complain about the lack, in the catering institutes, of specific training courses after which obtaining the status of pizzaiolo.

Under consideration also the quality of the oil and the pizza boxes for an interesting discussion which the participants took part in, while the journalist Luciano Pignataro, concluding the morning, said that what is handmade and can’t be quickly duplicated annoys. Naples exudes the craftsmanship from all its pores, this leads it to be an easy target for those who are primarily interested in the numbers, both in production and in the ratings.

Yes to information, no to unnecessary alarmism, it is not the right time to inflict severe blow to an already struggling economy and those who live by honest work and correctly.