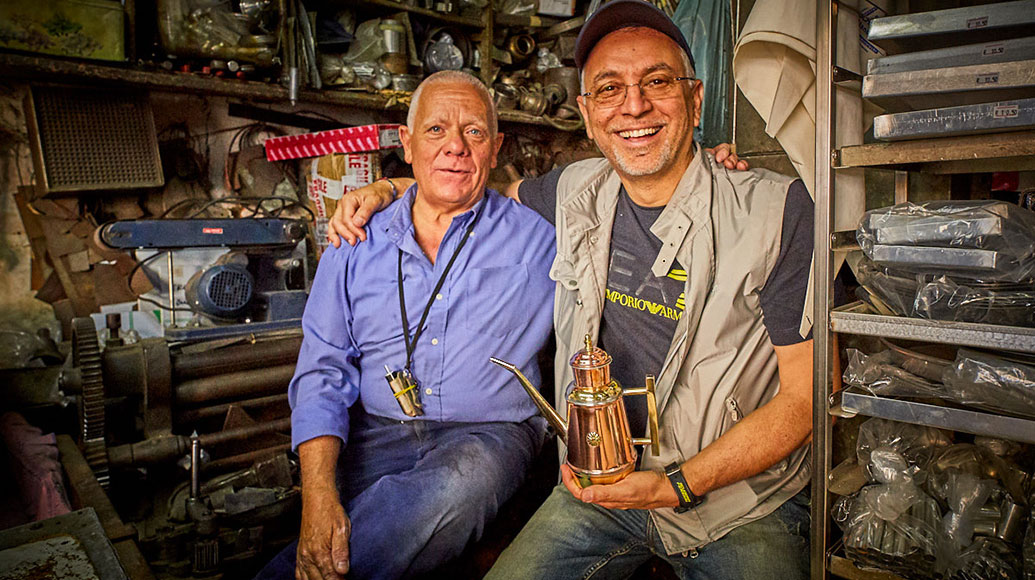 I phone my friend, the photographer Luciano Furia, and tell him: “tomorrow, I’ll pop round to your place at 10am, I’ll bring you to meet a true artisan”. Luciano lives in one of Naples’ oldest and most beautiful squares named San Domenico Maggiore.

The appointment is outside his house, we have a coffee at Scaturchio, Naples’ oldest pastry shop in San Domenico Maggiore Square and, like two missionaries, we head off. We pass through via San Biagio dei Librai, it’s a wonderful sunny day, but it is not hot. A multitude of tourists crowds Naples with the guides telling the history of the city. We go down via Forcella, we cut through via Pietro Colletta where my grandmother lived and here we finally arrived at via Annunziata where Antonio’s very small shop is. I see Antonio Colimoro again after many years, born in 1953, short, with blue eyes like the sea that flows through Posillipo. His eyes narrate, reassure and instill inner peace but, at the same time, ooze a clever and ancient intelligence.

Antonio loves to be called lattoniere (tinsmith) for three generations, when someone calls him stagnaio (tinplate worker) he gets angry.

“It is a different job – Antonio says – the tinplate worker is the person who welds things made of tin while I work with aluminum or copper metal sheets using simple tools and a regular metal sheet bending. I make objects of common use in Neapolitan places, pizzerias, fry shops and bakeries – Antonio continues his description –  I make priciatelle (skimmers), pins or nails, vacante (fry dripping tray), baking pans for the casatielli, agliare o Pizz ‘e olio (copper oil jugs), pizza peels, caccavelle (big frying pans), scafarea (large bowl for pasta cresciuta) fireplaces and trivets (on which the frying pan lays with the burners underneath)”.

I know why Antonio resists to the industrialization and the globalization: he produces common but essential equipment for Neapolitan food places; he is an unwitting custodian or rather a guardian of the street food temple.

Thank you Antonio, you big us up with your tools!