Neapolitan pizza with whole wheat flour or respect the tradition

Neapolitan pizza with whole wheat flour or respect the tradition

This morning Paestum, which, for two days, was the backdrop of Le Strade della Mozzarella (The Roads of Mozzarella) 8th edition, the biggest event on the Mozzarella di bufala Campana DOP, started off a debate on “Pizza napoletana, integrali o integralisti” (Neapolitan pizza, whole wheat flours or fundamentalists). Present at the happening, taking the floor, I faced the issue from a social, historical, scientific and technical point of view.

In the last two decades there has been a real escalation in the sale of organic products. It spread the equivalence organic food = healthy, because natural. From habit of a minority, however, quite expensive, that of eating organic food has become an actual trend, especially under the pressure of some aggressive marketing strategies that greatly influence the collective’s choices.

Trying to reach the coveted goal of “healthier and more beautiful”, we are also seeing the increasing use of whole wheat flours, as well as the alternative flours. But, as a popular proverb says, all that glitters is not gold: on one hand the whole wheat food products undoubtedly have their pros, on the other some cons.

The history, then, tells us that the pizzaiolo, in the early 1800s, used to mix the ingredients in a wooden container, known as madia, and, with the help of a sieve, separated the flour from the bran. Without forgetting that, nearly half a century later, De Boucard wrote: <<Pizza cannot be found in the Crusca Academy dictionary, because it is made with the flower of flour […] >>.

Scientifically speaking, however, in the digestive process, the fibers favor a slow assimilation of carbohydrates. Not raising the blood sugar and lowering the insulinic response (insulin is secreted when blood sugar level is too high. Its function is to lower blood glucose by activating a number of metabolic and cellular processes), the fibers prevent to extract excess sugars, changing them into fat which over time could cause certain diseases such as diabetes, for the great work to which the pancreas is subjected, and obesity, for the accumulation of adipose tissue.

Regarding to the digestibility of the pizza, the rising time is essential and it is useful to underline that is mostly determined by the proteins that form gluten. In effect, gluten is a complex protein, the combination of gliadins and glutenins that, with different molecular weights, as well as different structure (linear to branched structures), in the presence of water molecules give rise to multiple hydrogen bonds. Moreover, they tangle up creating physical bonds, called entanglements, that generate the gluten network. This process is important because it gives the dough softness and elasticity, which are essential for the Neapolitan pizza, but, at the same time, makes it less digestible. That’s why longer rising times are preferable, as in our case 14/16 hours in relation to the strength of flour W (280/300), since the enzymes involved in the growth of the pizza dough partially consume the gluten helping our digestive system to dispose of it.

From a technical point of view, according to the Italian regulations, flours are classified on the basis of the ash content on 100% of dry basis: 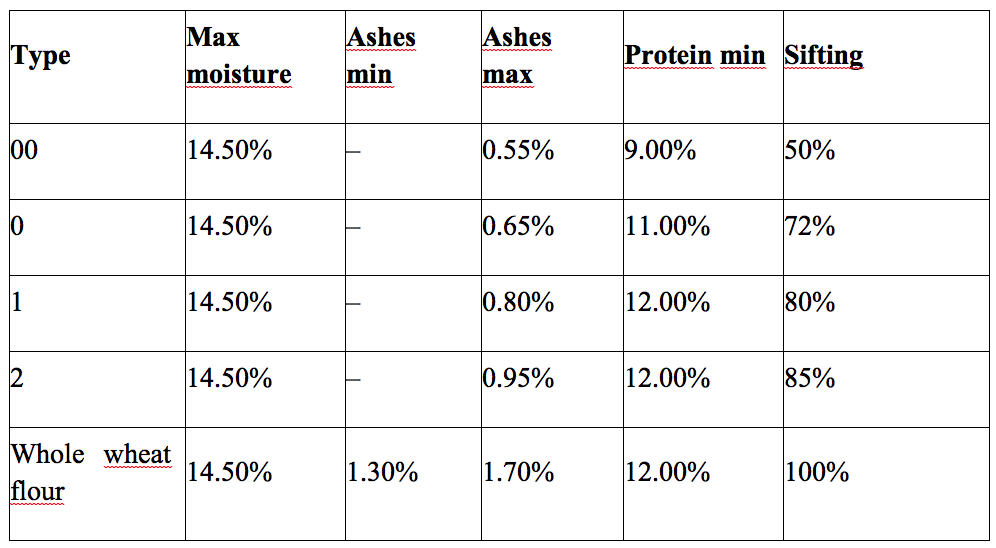 Using only the whole wheat flour you will obtain a heavy dough for which the water / flour ratio does not respect the proportion 1 lt/1.7-1.8 kg because of the different water-absorbing capacity of the flour.
The Neapolitan tradition would oblige us to be fundamentalists, but you could also use the whole wheat flour as long as it is dosed sparingly and mixed with the extra-fine 00.