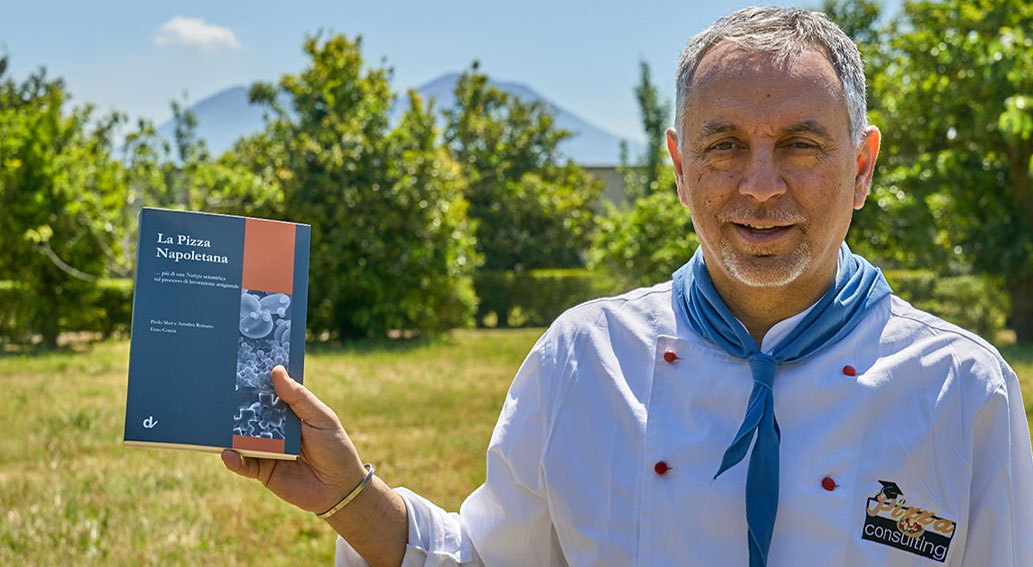 Neapolitan pizza is not just tradition. To the history, culture and technology, it must be added the scientific knowledge, they are all essential elements to ensure balance and harmony to a product of excellence such as the Neapolitan pizza. Do not you believe it?

Therefore, I’d like to give you some examples of how scientific research is important for the pizzaiolo profession.

Recently, I’ve been to Dubai for an event in collaboration with Gambero Rosso at Palazzo Versace, in the hotel’s mega kitchens there was a big machinery connected to a computer. Talking with the chef, he explained me that this device is simply a desalinator to turn salt water into freshwater because Dubai has no rain which is the main source of fresh water.

As we all know, the water encourages the gluten formation, it is essential for the life of the yeast and it hydrates the starch granules during the baking. The water hardness is expressed in French degrees and its values shouldn’t be neither too high nor too low. Water must have between 5 and 20 French degrees: if it is less than 5, the dough becomes sticky and lacking in the gluten network. On the other hand, if the value is higher than 20 degrees, it causes poor gas production, limits the yeast activity, creates a tighter gluten network that requires a longer time to rise and affects the dough digestibility.

Another example which illustrates that the scientific knowledge is important concerns the way of using oil for frying.

In my pizzerias, I use a high oleic sunflower oil which has a smoke point above 190 degrees. It reaches even 225 degrees. This oil is richer in oleic acid (around 82%), which is mainly what characterizes olive oil. The particular presence of the oleic acid makes the sunflower oil more stable at high temperatures than regular oil, more resistant to the oxidation and the degradation of the monounsaturated fats. What differentiates the oils one from another is a different smoke point, the temperature at which the oil starts to burn becoming toxic. This phenomenon produces two substances: acrolein and acrylamide. Acrylamide forms in some starchy foods, which are rich in carbohydrates, during high-temperatures cooking methods such as frying as when preparing the deep-fried pizza. For this reason, when frying we should pay close attention to the process because the flour contains a high amount of starch.

Another perspective of the scientific knowledge concerns food safety. Thinking about the use of the wood-fired oven to bake the pizza, for instance there is a specific regulation, UNI 14961-52011, which regulates the type of wood, the size of the logs, their provenance, the tree cutting permit (forestry regional rule that specifies where to cut so as to let the trees regrow), a compliance certificate for the wood, the lot number and a certificate to indicate that it is a solvent-free wood. Those who think that the Neapolitan pizza is only a matter of technique are mistaken!